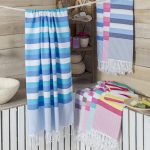 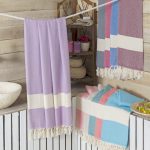 About peshtemal, also known as hammam towel or Turkish towel, which had different usage purposes, can be used in a wide variety of things nowadays.

Peshtemal was used as a hammam and bath towel in the past. Now it is being used especially in sauna, spa, pool, hotels, beach and gym, fascinating people with its stylish visuality and comfortable usage.

We often see peshtemals at beaches especially in recent years, lights up the users and beaches with its colors and elegant patterns. It is trip-friendly, you can easily take it to the beach with you as it covers a little space in your backpack and easy to carry around. Turkish beach towel fascinates the consumers with its special features; it dries quickly, doesn’t weight your bag down, and is colorful.

Peshtemal manufacturers have not only been limited to the beach, sauna and gym, by developing their product range well in the direction of increasing demands. Also in home textile they created different concepts such as peshtemal bed linen, peshtemal pillowcase, peshtemal tablecloth, peshtemal bathrobe, peshtemal dress, peshtemal bag, etc.

Women are wearing different patterned peshtemals as daily clothes. In summertime we often see ladies wearing peshtemals. It has become an all-time piece for summer as it keeps its wearer cool in hot summer days, and is comfortable.

With the increasing demand for it, Hotels and Spas started to use peshtemals in their facilities. It has become the number one product of the spa and hotels, especially due to its high water absorption capacity, its light weight and it covers less space than a normal towel. With the increasing interest in peshtemals, the sales are enjoying a boom in the domestic and overseas markets in recent years. Turkish peshtemals are renewed day by day with increasing product potential and quality.